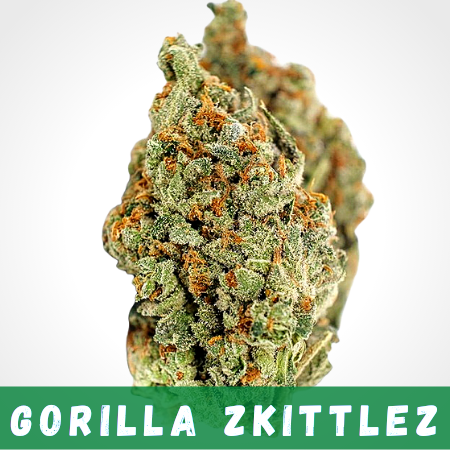 Gorilla Zkittlez is a cutting-edge hybrid that was created with the intention of introducing a beast to the rest of the globe. Due to the high THC content, this particular cannabis strain, which is predominately indica, produces extremely potent highs. The flowering period is quite short, the yields are enormous, and the flowers look strikingly beautiful.

Investigate this variety that will leave you thinking.

Prepare to be terrified, for this strain of cannabis is an utter monster. The highly powerful Gorilla Glue had a craving for snacks and became acquainted with Zkittlez, a flavor that has won multiple awards. The creation of Gorilla Zkittlez is directly attributable to the union of these two entities. The THC content reached 24%, which is plenty to sate the appetite of even the most seasoned cannabis consumer.

The effects of Gorilla Zkittlez are profound, and they include being both calming and stimulating the mind. It’s the kind of pressure that’s ideal for when you want to watch a psychological drama that has a lot of unexpected turns. Both the scents and the tastes are intensely reminiscent of fruit. Gorilla Zkittlez will improve the flavor of any cannabis-infused cake or other delights that you create, so be sure to pick some up if you’re in the mood to bake!

Consuming Gorilla Zkittles can lead to dry mouth, dry eyes and in some cases dizziness. This is a highly potent indica hybrid that can make you lazy and glued to the couch.

The flavor profile is sugary sweet in all of the best ways. It’s a combination of old-school and new-school, fruity and aromatic in both taste and smell. A floral hint accompanies the delightful fruitiness.

Regardless of whether it is grown inside or outdoors, plants of this strain can reach a height of between 140 and 170 centimeters. The flowering stage can last anywhere from 56 to 63 days, and indoor producers should expect yields of between 500 and 700 grams per square meter. Growers of cannabis in the open air should expect to harvest between 2,000 and 2,500 grams per plant, which really is absolutely absurd when one considers how quickly the plant blooms and the intrinsic strength of the plant.

That’s a ridiculously high concentration of cannabinoids in such a short amount of time! Obviously, in order for the plants to reach this heights, they need to be nurtured with the utmost care. However, this does not imply that a beginner cannot get satisfactory results; the author offers something for each and every reader.

The flowering stage of Gorilla Zkittlez is really quick and it only takes her 56 to 63 days from start to finish. This cannabis strain can reach heights of 140cm indoors and her yields are quite impressive at 500-700 grams per square meter indoors.

This indica hybrid strain loves to thrive outdoors and can grow absolutely massive in the open air. Gorilla Zkittlez can yield 2,000 – 2,500 grams per plant, she is an absolute monster if you treat her right. This marijuana strain can reach a height of 170 cm if grow out door and her flowering stage is quite short at 56- 63 dats.

What does Gorilla Zkittlez yield?

It really depends on the growing conditions she was grown in but on average Gorilla Zkittlez THC levels are super high at 24% or more.

Gorilla glue was crossed with Zkittlez in order to create this super potent and tasty cannabis strain named Gorilla Zkittlez.

Have you ever tried or cultivated your own strain? We would really appreciate it if you could let us know in the comments what your thoughts are on this particular strain of marijuana.
reviews

gorilla zkittlez is a super strain

When I talk about how the Gorilla Zkittlez grew, I can say that Barney’s Farm’s genetics once again showed how strong they are. This grove was a pleasure to grow and harvest. The plant is very strong and has a killer effect on everyone. It has a very interesting range of smells. I tell all people who like positive, chatty, relaxing things.

I have to suggest immediately that I had become a big admirer of Gorilla Glue genetics. The eﬀects were expected, but damn, it’s beautiful. Two of their own friends had already tried it.

Here are their separate thoughts, if you will. If you recall that buddy who grew Grinspoon at the same time as me, he had this to say: “You, salient, have always had killer flowers coming out.

“This is the 2nd greatest kind I’ve ever smoked.”

After smoking, another friend I had given the previous grow tent, said, “Strong grass. It’s clear right away that it’s a photoperiod strain.”

As the effect would suggest, this same Gorilla Zkittles is an iconic hybrid that can be used at any time of day. The effect happens very fast. After the smoker takes a puff, the “helmet” effect of the gorilla’s paws can be felt. The gorilla tries to squeeze the smoker’s brain with its paws, squeezing out all the bad feelings and quietly spilling euphoria in return. Very good at making you talk a lot.

You could indeed spend hours talking about all kinds of useless things and forget about real problems. Now for the other side. During the same time, vibrations of calm spread throughout the body, keeping it from sinking into the couch. Like that, you turn into a happy sausage ready to walk, eat, and lay down.

It also works well as a painkiller, because I completely forgot about the toothache. I smoked just the tops of the buds—I broke off about 2–3 cm of the juicy bud at the very top—and the effect has been different. It made me feel psychedelic and made me want to move around.

Gorilla Zkittlez is a great hybrid that can give you euphoria, joy, and mental and physical relaxation. We won’t know how it tastes until later, but I can already tell that DinaVap, which took a break within a week of Grinspoon, will be utilized again to satisfy the owner’s sense of taste and sense of smell.