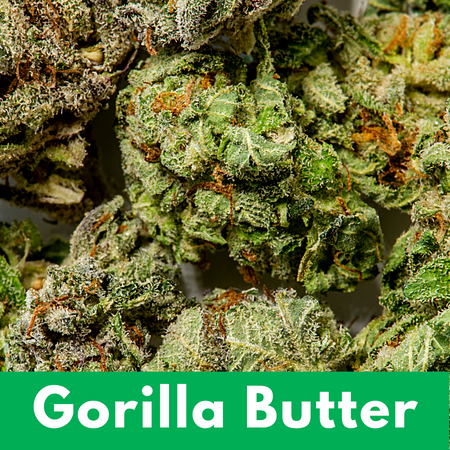 It was the company Fresh Coast Seeds that first developed the Gorilla Butter variety. Despite being a newcomer to the market, it has quickly gained a dedicated fan base. The Gorilla Butter strain, sometimes called Gorilla Butter F2 #12 and Monkey Butter, is a hybrid that combines the genetics of the Peanut Butter Breath and GG4 strains to provide an even 50/50 split between sativa and indica.

The terpene profile of the Gorilla Butter strain is described as including myrcene, alpha-bisabolol, alpha-pinene, limonene, trans-caryophyllene, and linalool. Terpenes are responsible for the strain’s aroma, flavor, and medicinal properties. Gorilla Butter grows buds that are tall and skinny, covered in a thick coating of trichome crystals & covered in tiny, bright orange hairs, and look almost neon green in color.

There’s no mistaking the strength of this strain from its flavor or fragrance. Even without trying it out for yourself, that fact alone would be enough to make the Gorilla Butter variety worth the money. Once you give it a try, you’ll understand what we mean.

Meanwhile, this review of the Gorilla Butter strain will provide all the information you require.

Gorilla Butter variant genetics is not something to laugh at. However, they are often coughed at because they come from such a lengthy family of powerful hitters as Northern Lights, GSC, & White Widow.

The indica-dominant Gorilla Glue #4 (a soothing 50/50 hybrid strain with a THC level reaching as high as 29%) is the paternal ancestor of the Sativa-dominant Peanut Butter Breath (the latter of which is the ancestor of the Gorilla Butter cannabis strain).

Though it has a reputation for being strong, this cannabis won’t make you completely lose your mind. The Sativa component of the Gorilla Butter breed works harmoniously with its indica heritage to provide a high that can be felt throughout the entire body.

Feelings of moderate tingling, beginning in the head and spreading throughout the body, will hit you nearly instantly. However, the effects of the Gorilla Butter strain are very welcoming and upbeat; they bring on feelings of joy and contentment.

After such mental contentment, the body hits a tranquil numbness that’s calming but doesn’t leave you utterly immobile. Gorilla Butter is a great strain to smoke with friends since it makes you calm and social.

Its high CBD content (0.59% to 0.89%) and diverse terpene profile have remarkable medicinal effects, easing inflammation, joint pain, and muscular soreness. In addition, those who suffer from stress, exhaustion, insomnia, and anorexia will appreciate the relief that the Gorilla Butter variety provides.

You may notice some minor adverse effects from using Gorilla Butter F2 #12, but this is to be expected, as is the case with nearly every other cannabis strain.

Cottonmouth, dry eyes, and hunger are the first symptoms. A seasoned smoker will have experience dealing with these concerns. Some caution may be warranted for new smokers or people with a limited tolerance for THC.

Extreme consumption of this variety may cause hypotension, wooziness, sleeplessness, heightened paranoia, and even anxiety. Moreover, you’ll experience a tingling sensation that some people find uncomfortable.

Finally, understand that moderation is the first guideline of smoking, and always do so safely.

How does it Smell?

The multifaceted aroma of the Gorilla Butter variety is one of the reasons for its widespread acclaim. It has a strong peanut butter aroma with undertones of tea & lemon.

The aroma of sweet mint and a pronounced peppery undertone are intermingled. The beautiful aroma of this strain is rounded up by the diesel undertones imparted by the Myrcene.

The aroma of Gorilla Butter Strain is indescribable and cannot be captured in writing.

How does it Taste?

Gorilla Butter has a complex aroma and flavor that can only be fully appreciated by trying it yourself. These little nuggets have a sweet and creamy peanut butter flavor plus an earthy and slightly peppery undertone.

On the exhale, the myrcene’s diesel/fuel aroma and flavor hit you like a ton of bricks. Additionally, you may detect aromas and flavors of woody pine and a mild garlic flavor.

Feminized versions of the Gorilla Butter strain’s seeds do not yet exist; growing this strain will include both male and female plants.

The structure of the cannabis plant is quickly covered before we get into the specifics of cultivating the Gorilla Butter strain; High quantities of THC can be found in the female plants’ buds, while the male plants create pollen.

If you want to fertilize your females, pollen is worth its weight in gold, but this is rarely the situation in home cultivation. You do not wish to the men; you want all the bud you can get.

Knowing which of your plants are female & which are male is the first step. Most amateur gardeners eliminate the males as quickly as the balls (pollen sacks) appear to prevent accidental pollination.

If you’re a novice grower, it’s best to seek advice from veterans. Alternatively, if you are an experienced farmer, you might replant your guys somewhere.

The cultivation of Gorilla Butter is also reasonably straightforward. It can live happily indoors or out if it receives adequate care and attention. Like its parent strain, Gorilla Glue, this one thrives in warm, sunny conditions and shouldn’t be overwatered.

The plants that sprout from Gorilla Butter strain seeds are gorgeous and typically reach a height of 30–60 inches, making them a delight to cultivate indoors (with far less required pruning).

The name “Gorilla Butter” alone suggests that this product is formidable. Unfortunately, you wouldn’t be entirely off base. This weed has a THC content of 20%-23% and will beat you like a gorilla if you don’t treat it with the proper reverence.

Any new smokers out there should proceed with caution. Moderation and pacing are essential when using it.

The first four to six weeks of a plant’s life cycle are crucial for determining the plant’s sex. This is because male plants mature more rapidly than female plants, and you must harvest the men before their pollination sacs release their male sperm and couple the females.

It takes about 55–61 days for Gorilla Butter (also known as Monkey Butter) to bloom, so be patient.

As a THC-dominant strain, Gorilla Butter F2 #12 provides pleasant effects and profitable harvests. It’s adaptable enough to flourish in both greenhouses and open fields. Even though the Gorilla Butter strain isn’t hard to grow, it’s still in your best interest to learn as much as possible about it.

Gorilla Butter is an absolute 50/50 hybrid strain which means 50% Sativa and 50% indica.

What is the Gorilla Butter strain flowering time?

The average flowering time for the Gorilla Butter strain is 9 weeks (+/-60 days).

It relies on who they ask. The first generation of a new species created by mating two species is known as the “first filial generation” (F1). An F1 hybrid, Gorilla Butter is a delicious addition to any collection. The “second filial generation” is what we get when we breed two F1 strains together (F2).

This is done by breeders so that they can take advantage of the strain’s superior characteristics. We get an F2 generation or Gorilla Butter F2 by mating two Gorilla Butters. Some people think it’s just the same strain in a better variety, while others see it as another.

Have you ever tried or cultivated this strain? We would really appreciate it if you could let us know in the comments what your thoughts are on this particular strain of marijuana.
reviews

With a total THC content of 19.42% and buds that are so dark, you may believe you were smoking pure black domina instead. In addition, my 8ths may be purchased for under $30 with a discount, which is a significant improvement over the garbage that is sold at Jars.

Known also as white truffle, this strain is excellent! excellent for relieving stress and tension, and a good choice for after work thanks to the calming, sedative effects of the buzz it produces. This controls and tames the wild animal that is within me, allowing me to sleep, rejuvenate, and enjoy the entire experience without experiencing any pain.

Insomnia, depression, chronic pain, and anxiety are among conditions that may benefit from the use of the potent hybrid strain known as Gorilla Butter. My impressions of the flavor profiles were that they were vanilla, buttery, and nutty in nature. a lot like biting into a butter biscuit or digging into a bowl of maple bacon ice cream. The resinous and sticky nuggets of the organic batch that I have made for a very enjoyable experience for me.